eBiznify – Award in eCommerce Practices awarded by Advenio eAcademy in collaboration with the Malta Communications Authority. 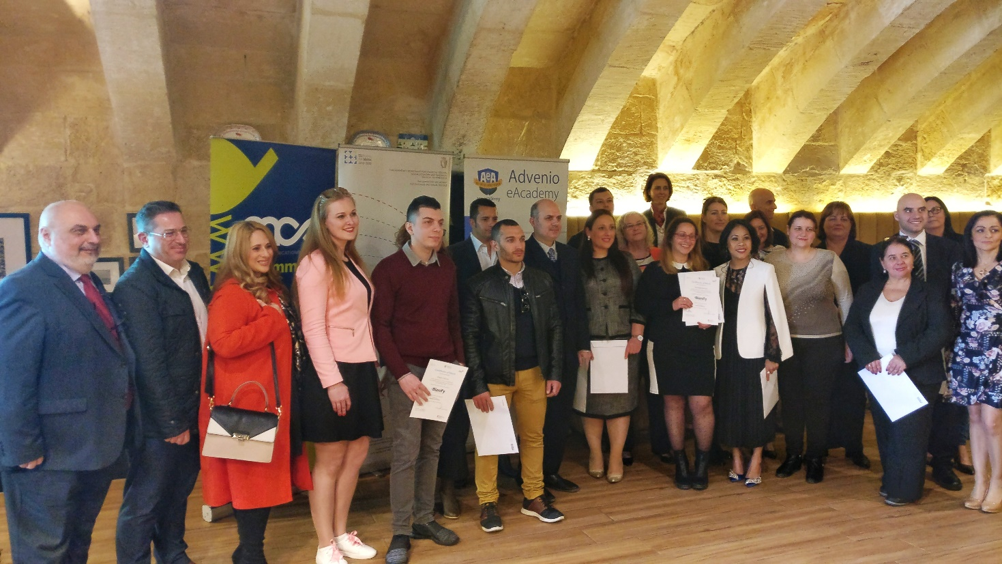 On the 19th of February 2020 at Marina Club Lounge in Valletta, the  Malta Communications Authority (MCA) hosted the graduation ceremony for intakes completed in 2019 of eBiznify –  Award in eCommerce Practices. Addressing the students, Faculty, and guests,  where the CEO of MCA, Mr. Jesmond Bugeja, the Parliamentary Secretary for European Funds, Hon. Stefan Zrinzo Azzopardi MP, Parliamentary Secretary for Financial Services and Digital Economy,  Hon. Clayton Bartolo MP, as well as Stephen P. D’Alessandro as Executive Director of Advenio eAcademy.

The CEO of MCA, Mr. Jesmond Bugeja, commented on the commitment of the MCA to foster and promote eCommerce in Malta and how pleased he was with the positive feedback received on the success of the Biznify  programme. He thanked the MCA team for their efforts and Advenio eAcademy for its involvement in the design, development and implementation of the programme. He praised the hard work put in by the students and congratulated them on their achievement.

In his presentation, the Parliamentary Secretary for European Funds, Hon. Stefan Zrinzo Azzopardi MP commented on the Government’s commitment to get the best EU funding possible for Malta. He was pleased to see EU funds being used so effectively as happened in the organization and development of the eBiznify programme. He congratulated the students on the successful completion of the progamme and augured that the programme will help them advance in their careers.

On behalf of Advenio eAcademy as the awarding body, Mr. Stephen P. D’Alessandro, Executive Director stated that he felt honored and proud of the successful achievement of the students. He highlighted about the successful collaboration with the Malta Communications Authority and the development process of the programme which was accredited by the NCFHE. This blended learning programme provided students with an introduction to the core concepts of eCommerce, design and development of a digital business and also mentorship in developing own web solutions. Mr. D’Alessandro expressed his thanks to the team at MCA for this excellent opportunity, to the Advenio eAcademy team for their dedication and commitment and finally to the students who trusted the academy and followed the programme. He congratulated the students on their achievement and stressed on the importance of life-long learning. Mr. D’Alessandro encouraged Government departments and other organisations to take up the challenge of integrating elearning in their staff development programmes. Advenio eAcademy is committed to continue supporting the Malta Communications Authority in maintaining the  eBiznify programme and its continued development.

In his presentation the Parliamentary Secretary for Financial Services and Digital Economy,  Hon. Clayton Bartolo MP spoke abut the importance of the digital sector to Malta’s continued prosperity. He outlined some of the many opportunities to those in the sector and praised MCA and Advenio eAcadmy for the eBIznify intiative. He congratulated the students on their achievement and augured them well for the future.

Certificates of merit were presented to students in recognition of their successful completion of the programme.